The killing of a pregnant elephant in Kerala that ate a pineapple stuffed with explosives will be investigated by the central government, Union Minister Prakash Javadekar said today. There has been an outpouring of rage and grief after tragic visuals of the elephant, dead in a river, emerged in a forest officer’s post earlier this week.

The government has taken “very serious note” of the elephant’s killing, said Mr Javadekar, Minister for Environment, Forest and Climate Change, in a post. “We will not leave any stone unturned to investigate properly and nab the culprit(s). This is not an Indian culture to feed fire crackers and kill,” the minister tweeted.

Central Government has taken a very serious note of the killing of an elephant in Mallapuram, #Kerala. We will not leave any stone unturned to investigate properly and nab the culprit(s). This is not an Indian culture to feed fire crackers and kill.@moefcc@PIB_India@PIBHindi– Prakash Javadekar (@PrakashJavdekar) June 4, 2020

Though Mr Javadekar’s tweet said the incident took place in Malappuram district of Kerala, the elephant died in the neighbouring Palakkad.

The wild elephant strayed into a village near Silent Valley National Park in Palakkad last Wednesday and ate a pineapple filled with firecrackers. It exploded in its mouth and in that state the elephant walked for days in pain before it went into a river and died standing on May 27.

Villagers in the region often use firecracker or explosive-filled fruit to protect their fields from wild animals, but the practice has been widely condemned as cruel and disturbing.

Photos shared on social media showed the elephant standing in the river with her mouth and trunk in water, perhaps for some relief from pain. Officials guessed from its shrunken form that the animal may have eaten the fruit 20 days ago and had starved since.

“We are investigating the nature of the explosive and as well as the food fed to her,” Kerala’s chief wildlife warden, Surendra Kumar, told AFP.

“We are investigating to find the people and circumstances that led to her death,” he added.

Officials are also investigating whether another elephant that died last month and was found with serious mouth injuries including a broken jaw had also eaten fruit packed with explosives.

There has been massive outrage on social media since Mohan Krishnan, a forest officer posted in Malappuram, wrote an emotional note on his Facebook page. “When we saw her she was standing in the river, with her head dipped in the water. She had a sixth sense that she was going to die. She took the Jalasamadhi in the river in a standing position,” wrote Mr Krishnan, who had been tasked with rescuing the elephant.

“She didn’t harm a single human being even when she ran in searing pain in the streets of the village,” he wrote. 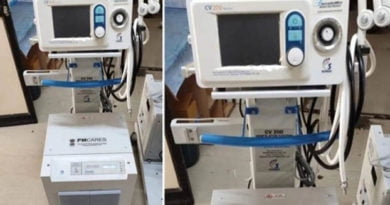 50,000 Made in India Ventilators under PM CARES Fund to fight COVID-19 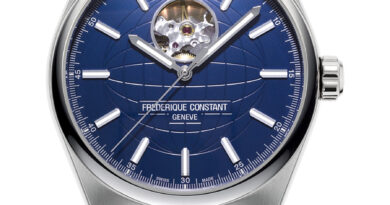 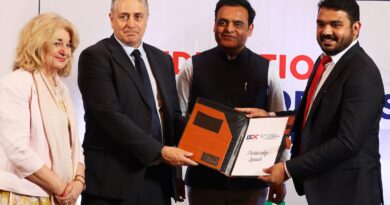